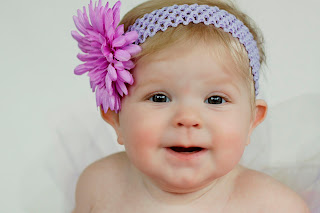 So, I never really did a six month update for Maggie and her seventh month is nearly over.  I think, however, all the mini-updates have pretty much captured the situation.  Here are a couple recent videos of her big new tricks and a brief run down of key things I want to remember.

Sitting: Started 6th month sitting well and by the end of the 7th can move into a sitting position by herself and back into a crawling motion.

Crawling: In the 6th month, she started trying this, but mostly going backwards or spinning.  By the close of the 7th she can get anywhere she wants to go.  Granted, it isn't crawling yet in a pretty organize motion, but but it gets the job done and she WILL find any paper scrap that might be laying about.  Be warned!

Eating:  Her group of foods continues to expand.  In the 7th month we moved on to more mixes of things and added small pasta and slightly smushed rice to the mix as well as the normal purees.  She also is eating more baby yogurt.  Lately, she is also having bits of bread torn into bits.  The seventh month marked the arrival of cheerios and other small cereal bits so that she can self-feed. It is messy, but cute. Still drinking 6oz of formula usually, but is 8oz at night and 4oz in the morning for some reason.

Playing: I did the whole post on toys and it is about the same now.  Mostly, she chews on B's toys, but will also turn the pages in her Squishy Turtle and Friends  book and play with the pages.  She loves taking off her socks, hat, and whatever else she can.  She will do all sorts of things with her paci, blanket or lovey if one is available.

Sleeping: For the sixth month she hung around the 8-9 hour mark most of the time and wanted to be a night owl so was still going to bed around 10 some nights.  In the seventh,  she moved to a normal kid bedtime of 7:30-8.  Sometimes she will wake a bit between 8 and 11 looking for her paci, but otherwise relatively routinely slept til 4:30 or 5 with lovely periods where she would sleep until 7 or later.  The ongoing ear infections for most of the month coupled with the teething have not helped this situation.  She is pretty good about putting herself to sleep for naps and bedtime although occasionally we still snuggle.  This week we're nailing down the nap routine as I've let B and I's schedule get in the way of this.  It looks like we're settling on a 10:30 and 2:30ish nap routine.  However, sometimes we blow the 2:30 slot when we pick up B and for some reason it shifts until 4?

Stats:  We have some conflicting data about how much she weighs.  On December 31, it as about 19 3/4lbs.  Then on the 5th of February they said about 18lb ll oz (I think).  Randomly about a pound less, but there were clothes the first time and none the second.  Our wii had said about 21lbs this same week.  We were back at the Doctor on the 22nd to check her ears and she weighed about 22.5 so either she gained nearly four pounds in two weeks, has really heavy clothes or there is some user error in there somewhere.  She only grew a little from her 6 month appoint and I think was about 26.5 inches.  Her head continued to measure off the charts.

Clothes: 12 month pants and 18 month tops/dresses (for pretty much both months).  She must have really long arms as the sleeves on things are always too short for some reason.  Thanks to Serenity and her mama  for loaning us  a new batch of clothes to try this week. Still searching for the perfect sock. 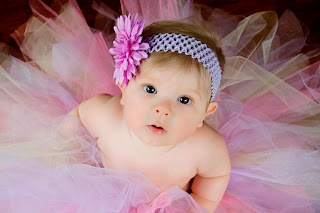 (Photos by Krisit Morton of Twice Blessed Photography, Tutu by "Fraunt" Sarah, and headband and flower by Fairy Wonderful).

Sad things:  In sad news, she is starting to have some separation anxiety so she will cry when you leave the room or her vicinity.  So far, no crying when I leave her at child care, but still makes me sad.  Also, a bit sad to not have as much time to just focus on her as I feel like we did/do with B.  I know that is part of the deal, but know I could focus in more than I do some days.  Here's hoping:)

Favorites: I love her laugh.  It is much more prevalent now and usually directed at her brother or the boys at Ms. Maureen's.  When she is feeling well she is such a smiley, happy girl that I can't wait for longer well stretches. I love it when our eyes meet and she just glows with happiness. I also loved the girly professional pictures we had done.  So much fun.

Videos:   Hopefully these work:)  The first is a demo of her "crawling" skills.  The later is her new laughing and raspberry noises (video courtesy of Tracie, and apologies for my looking pretty rough).  You should be able to hear all the silliness if you turn up the volume.  --Let me know if these aren't working as this is my first attempt at loading video here.


Here's to another month of fun. I love you sweet wonderful baby lady.
Posted by Abbey at 10:18 PM

Email ThisBlogThis!Share to TwitterShare to FacebookShare to Pinterest
Labels: Maggie

Go Maggie Go!!!! No stopping her now!!! I had to try so hard not to laugh while she was laughing!!!!

What a wonderful post - and gorgeous pictures! Are you taking those yourself? You must share your tricks - what camera? what setting? what lens (assuming you are using your DLSR)? They are magnificent and seem to just capture her spirit!